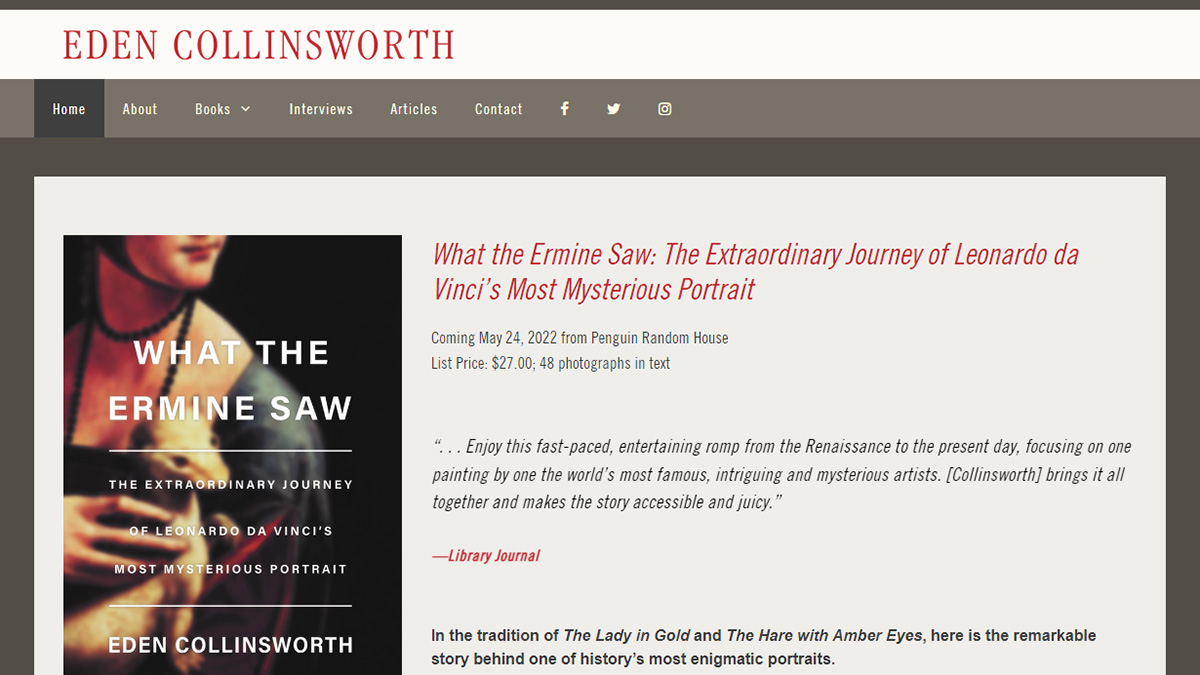 What the Ermine Saw: The Extraordinary Journey of Leonardo da Vinci’s Most Mysterious Portrait

“With sometimes dizzying effect, Collinsworth vaults between granular detail and grand context. What the Ermine Saw bolts through wars and empires, art-making and state-making across the continent in the last 500 years.”

“Collinsworth unwinds a thoroughly captivating story about a single painting… Filled with beauty, passion, greed, and evil, [her] search is a spirited art history yarn.”

“Princes, dukes and enterprising women fill this story of the life of a remarkable painting . . . Ms. Collinsworth proves herself a skilled portraitist in her own right.”

“Intriguing… This is an entertaining and accessible study of a masterpiece.”

“A picaresque of unbridled passions and unmitigated scoundrels. Eden Collinsworth takes us on a glorious romp through the great palaces and palazzos of Europe as she traces the extraordinary adventures of one of Leonardo da Vinci’s greatest masterpieces.”

In the tradition of The Lady in Gold and The Hare with Amber Eyes, here is the remarkable story behind one of history’s most enigmatic portraits.

Five hundred and thirty years ago, a young woman sat for her portrait during some part of every day for weeks; for those same weeks, the painter stood hour after hour in front of his easel in contemplation without making a single brushstroke. When, finally, he picked up his brush, he accomplished something that manages even today to do what very little else can—astonish us.

The year was 1490. The painting is known simply as Lady with an Ermine. The unique being who conceived it was Leonardo da Vinci. His greatness unfurled during an era of upheavals: like today, political divisions polarised people, socioeconomic disparities threatened to upend nations, and there had been a plague.

Despite the portrait’s importance in its own time, no records of it have been found for the two hundred and fifty years it went missing. Expertly researched and deftly told, What the Ermine Saw illuminates the eventual history of this unique masterpiece, as it journeyed from one owner to the next—from the brutal Milanese duke who commissioned it, to an unconventional noblewoman, to Nazi high command, instructed by Hitler that it be added to his private collection. Along the way, the portrait witnessed some of history’s most immoral undertakings, as well as some of humanity’s greatest advancements, until it came to rest at the Czartoryski Musuem in Krakow, in Poland where it is currently displayed. One need not be a historian or art expert to be drawn into its enthralling story.